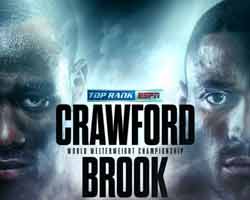 Review by AllTheBestFights.com: 2020-11-14, pretty good finish between Terence Crawford and Kell Brook but it is not enough to get three stars: it gets two.
The undefeated world champion in three different weight classes Terence Crawford entered this fight with a perfect boxing record of 36-0-0 (27 KOs=75%) and he is ranked as the No.2 welterweight in the world (currently the #1 in this division is Errol Spence Jr). In his last three bouts he has won over Jose Benavidez (Terence Crawford vs Jose Benavidez), Amir Khan (Terence Crawford vs Amir Khan) and Egidijus Kavaliauskas (Terence Crawford vs Egidijus Kavaliauskas).
His opponent, the former Ibf Ww champ Kell Brook, has an official record of 39-2-0 (27 knockouts) and he entered as the No.10 in the same weight class. He lost two consecutive fights between 2016 and 2017, against Gennady Golovkin (4-stars fight, Golovkin vs Brook) and Errol Spence Jr (Kell Brook vs Errol Spence Jr) but then he has won three fights defeating Mark Deluca in 2020 (Kell Brook vs Mark DeLuca). Brook vs Crawford is valid for the WBO World welterweight title (Crawford’s fourth defense). Watch the video and rate this fight!