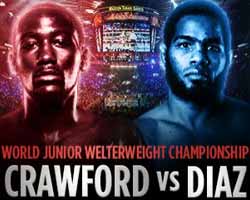 Review by AllTheBestFights.com: 2017-05-20, good fight between Terence Crawford and Felix Diaz: it gets three stars.

The undefeated Wbc and Wbo light-Ww champion Terence Crawford entered this fight with a perfect record of 30-0-0 (21 knockouts) and he is ranked as the No.1 super lightweight in the world. He fought three times in 2016 winning over Henry Lundy (=Crawford vs Lundy), Viktor Postol (=Crawford vs Postol) and John Molina Jr (=Crawford vs Molina Jr).
His opponent, the 2008 Olympic light-Ww gold medalist Felix Diaz, has a boxing record of 19-1-0 (9 knockouts) and he entered as the No.16 welterweight. He suffered his only loss when he faced Lamont Peterson in 2015 (via majority decision, Peterson vs Diaz), after this fight he has beat Sammy Vasquez (=Vasquez vs Diaz) and Levis Morales. Terence Crawford vs Felix Diaz is valid for the WBC and WBO World super lightweight titles (held by Crawford). Watch the video and rate this fight!