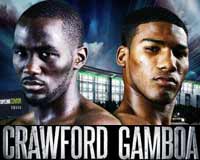 Review: 2014-06-28, exciting back and forth battle between Terence Crawford and Yuriorkis Gamboa: it is very close to get four stars! Both undefeated, the American Terence Crawford entered this fight with a perfect record of 23-0-0 (16 knockouts) and he is ranked as the No.2 lightweight in the world (currently the #1 in this division is Miguel Vazquez), he has already fought in 2014 winning the Wbo belt against Ricky Burns (=Burns vs Crawford).
His opponent, the 2004 Olympic flyweight gold medalist Yuriorkis Gamboa, has the same record of 23-0-0 (16 KOs) but he is not ranked as he hasn’t fought since June 8, 2013 when he beat Darleys Perez in a bout valid for the interim WBA World lightweight title (=Gamboa vs Perez); Gamboa has won world titles in three different weight classes, Crawford ‘just’ in one but he is 26 years old while the Cuban is 32. Crawford vs Gamboa is valid for the WBO lightweight title (Crawford’s first defense). Watch the video and rate this fight!