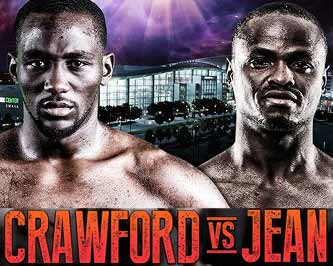 Review by AllTheBestFights.com: 2015-10-24, some good exchanges between Terence Crawford and Dierry Jean but it is not enough to get three stars: it gets two.

The undefeated Terence Crawford entered this fight with a perfect boxing record of 26-0-0 (18 knockouts) and he is ranked as the No.1 super lightweight in the world. He won the Wbo Lw belt last year, against Ricky Burns (=Burns vs Crawford) but after two defenses, against Yuriorkis Gamboa (=Crawford vs Gamboa) and Raymundo Beltran (=Crawford vs Beltran), he moved up in weight class winning the vacant Wbo super-Lw title against Thomas Dulorme (=Crawford vs Dulorme).
His opponent, Dierry Jean, has an official record of 29-1-0 (20 knockouts) and he entered as the No.10 lightweight. He suffered his only loss last year when he faced Lamont Peterson (=Peterson vs Jean), but after this fight he has won four consecutive bouts beating Jerry Belmontes in his last one (=Jean vs Belmontes). Crawford vs Jean is valid for the WBO World super lightweight title (Crawford’s first defense). Watch the video and rate this fight!