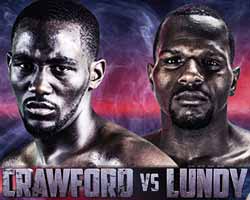 Review by AllTheBestFights.com: 2016-02-27, good fight between Terence Crawford and Henry Lundy: it gets three stars.

The undefeated Wbo light-Ww and former Wbo Lw champion Terence Crawford entered this fight with a perfect record of 27-0-0 (19 knockouts) and he is ranked as the No.1 super lightweight in the world. He fought twice in 2015 winning over Thomas Dulorme (=Crawford vs Dulorme) and Dierry Jean (=Crawford vs Jean).
His opponent, Henry Lundy, has an official boxing record of 26-5-1 (13 knockouts) and he entered as the No.15 lightweight. He suffered two consecutive defeats between 2014 and 2015, against Thomas Dulorme (=Dulorme vs Lundy) and Mauricio Herrera (=Lundy vs Herrera), but then he came back to win against Carlos Winston Velasquez. Crawford vs Lundy is valid for the WBO World super lightweight title (Crawford’s second defense). Watch the video and rate this fight!