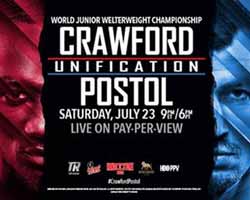 Review by AllTheBestFights.com: 2016-07-23, disappointing fight between Terence Crawford and Viktor Postol: it gets two stars.

Both undefeated, the former Wbo Lw and current Wbo light-Ww champion Terence Crawford entered this fight with a perfect boxing record of 28-0-0 (20 knockouts) and he is ranked as the No.1 super lightweight in the world while his opponent, the Wbc light-Ww champion Viktor Postol, has the same record of 28-0-0 (12 knockouts) and he entered as the No.2 in the same weight class. In their last two fights Crawford has beat Dierry Jean (=Crawford vs Jean) and Henry Lundy (=Crawford vs Lundy) while Postol has defeated Jake Giuriceo and Lucas Matthysse (=Matthysse vs Postol). Crawford vs Postol is valid for the WBC and WBO World super lightweight titles. Watch the video and rate this fight!