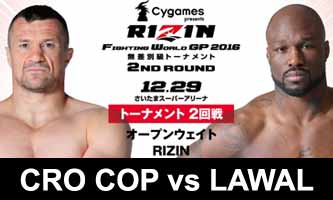 Review by AllTheBestFights.com: 2016-12-29, pretty good finish between Mirko Filipovic and King Mo Lawal but it is not enough to get three stars: it gets two.

The black belt in tae-kwon-do and former K-1 and Pride champion Mirko ‘Cro Cop’ Filipovic entered this fight with a professional mma record of 32-11-2 (91% finishing rate) and he is ranked as the No.31 heavyweight in the world. He suffered his last loss when he faced Alexey Oleinik in 2013 (=Filipovic vs Oleinik), since then he has won four bouts beating Gabriel Gonzaga (=Gonzaga vs Filipovic 2) and Hyun Man Myung (=Cro Cop vs Myung).
His opponent, Muhammed ‘King Mo’ Lawal (who replaces Wanderlei Silva), has an official record of 20-5-0 (65% ko/tko victory rate – he has never won via submission) and he entered as the No.13 in the same weight class. He has fought twice in 2016 losing to Phil Davis (=Davis vs Lawal) and winning over Satoshi Ishii (=Lawal vs Ishii). Cro Cop vs Lawal, main event of Rizin 3 2016 2nd Round, is the quarter-final of the Rizin openweight Grand-Prix tournament. Watch the video and rate this fight!