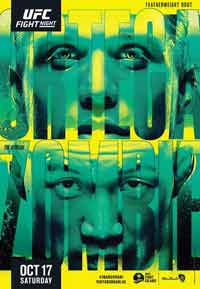 Review by AllTheBestFights.com: 2020-10-18, pretty good finish between Jimmy Crute and Modestas Bukauskas: it gets three stars (UFC Performance of the Night).
The black belt in Brazilian jiu-jitsu Jimmy Crute entered this fight with a mma record of 11-1-0 (73% finishing rate) and he is ranked as the No.27 light heavyweight in the world. He lost to Misha Cirkunov last year (Jim Crute vs Misha Cirkunov) but then he came back back to win against Michal Oleksiejczuk in February 2020 (Jim Crute vs Michal Oleksiejczuk).
His opponent, Modestas Bukauskas, has an official record of 11-2-0 (91% finishing rate) and he entered as the No.57 in the same weight class. He lost two consecutive bouts in 2016, against Pavel Doroftei and John Redmond, but then he has won seven fights defeating Andreas Michailidis in his last one. Bukauskas vs Crute is on the undercard of Brian Ortega vs Korean Zombie – UFC Fight Night 180 (also known as UFC on ESPN+ 38 or UFC Fight Island 6). Watch the video and rate this fight!