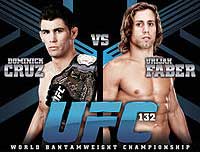 Review: 2011-07-02, the first time that Dominick Cruz fought against Urijah Faber was in 2007 and at the moment has been his only defeat in his career, but in this second fight Cruz defeated Urijah Faber by unanimous decision, retaining his UFC Bantamweight title. Dominick Cruz vs Urijah Faber 2 was the main event of the UFC 132 and was also awarded as the “fight of the night”. Watch the video!

Alternative highlights video (the fight Cruz vs Faber starts at 5:57)