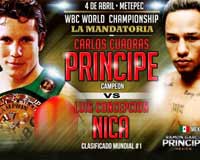 Review by AllTheBestFights.com: 2015-04-04, pretty good fight between Carlos Cuadras and Luis Concepcion: it gets three stars.

The undefeated Carlos Cuadras entered this fight with a professional boxing record of 31-0-1 (25 KOs=80%) and he is ranked as the No.3 super flyweight in the world (currently the #1 in this division is Naoya Inoue). He won the Wbc super-Flw title last year, against Srisaket Sor Rungvisai (=Srisaket vs Cuadras), then he drew with Jose Salgado (=Cuadras vs Salgado) and he won over Marvin Mabait in his last bout.
His opponent, the former Wba Flw champion Luis Concepcion, has an official record of 32-3-0 (23 knockouts) and he entered as the No.15 in the same weight class. ‘El Nica’ Concepcion lost twice in 2011 against Hernan Marquez (the first fight was one of the best boxing fights of 2011, Marquez vs Concepcion I and Marquez vs Concepcion II) but since then he has collected nine consecutive victories beating Duvan Hernandez in his last fight (=Concepcion vs Hernandez). ‘Principe’ Cuadras vs Concepcion is valid for the WBC World super flyweight title (Cuadras’ third defense). Watch the video and rate this fight!