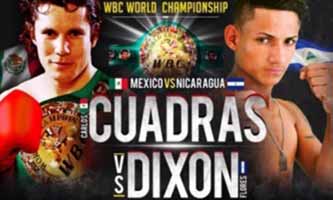 Review by AllTheBestFights.com: 2015-08-15, nice and tough exchanges between Carlos Cuadras and Dixon Flores: it gets three stars.

The undefeated Carlos Cuadras entered this fight with a pro boxing record of 32-0-1 (25 KOs=78%) and he is ranked as the No.2 super flyweight in the world (currently the #1 in this division is Naoya Inoue) while his opponent, Dixon Flores, has a record of 11-2-2 (3 knockouts) and he entered as the No.65 bantamweight. Both boxers have already fought in 2015: Cuadras has defeated Luis Concepcion (=Cuadras vs Concepcion) while Flores has won over Bairon Rostran and Carlos Rueda. Cuadras vs Flores is valid for the WBC World super flyweight title (Cuadras’ fourth defense). Watch the video and rate this fight!