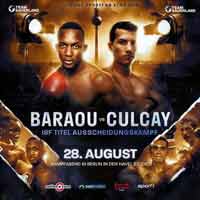 Review by AllTheBestFights.com: 2020-08-28, fight not so exciting between Jack Culcay and Abass Baraou: it gets two stars.
The former Olympian and former Wba light-Mw champion Jack Culcay entered this fight with a pro boxing record of 28-4-0 (13 knockouts) and he is ranked as the No.10 super welterweight in the world (currently the #1 in this division is Jermell Charlo). He lost to Sergiy Derevyanchenko last year (Sergiy Derevyanchenko vs Jack Culcay) but then he has beat Stefano Castellucci, Jama Saidi (Jack Culcay vs Jama Saidi) and Howard Cospolite (Jack Culcay vs Howard Cospolite).
His opponent, the undefeated Abass Baraou, has a perfect record of 9-0-0 (6 knockouts) and he entered as the No.23 in the same weight class. In his last three fights he has won over Abdelghani Saber, John O’Donnell and Abraham Juarez. Baraou vs Culcay is the main event of the evening. Watch the video and rate this fight!