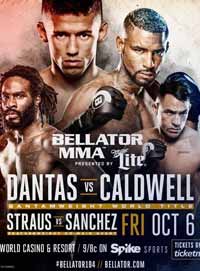 Review by AllTheBestFights.com: 2017-10-06, fight not particularly good between Pat Curran and John Teixeira da Conceicao: it gets two stars.

The former Bellator Fw champion Pat Curran entered this fight with a mma record of 22-7-0 (55% finishing rate) but he is not ranked as he hasn’t fought since May 20, 2016 when he defeated by Georgi Karakhanyan (=Curran vs Karakhanyan).
His opponent, the black belt in Brazilian jiu-jitsu John Teixeira da Conceicao, has an official record of 21-2-2 (67% finishing rate) and he entered as the No.25 featherweight in the world but ‘Macapa’ Teixeira comes off the loss against Daniel Weichel (=Weichel vs Teixeira). Pat Curran vs John Teixeira da Conceicao is on the undercard of Eduardo Dantas vs Darrion Caldwell – Bellator 184. Watch the video and rate this fight!