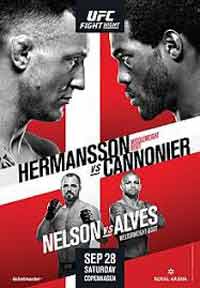 Review by AllTheBestFights.com: 2019-09-28, nice and tough exchanges between Khalil Rountree and Ion Cutelaba: it gets three stars.

Khalil Rountree entered this fight with a record of 8-3-0 (63% ko/tko victory rate – he has never won via submission) and he is ranked as the No.33 light heavyweight in the world. He lost to Johnny Walker last year (Khalil Rountree vs Johnny Walker) but he came back to win against Eryk Anders in 2019 (Eryk Anders vs Khalil Rountree).
His opponent, Ion Cutelaba, has a mma record of 14-4-0 (93% finishing rate) and he entered as the No.44 in the same weight class but he comes off the loss against Glover Teixeira (Glover Teixeira vs Ion Cutelaba); before this bout, in 2018, he had beat Gadzhimurad Antigulov. Rountree vs Cutelaba is on the undercard of Jack Hermansson vs Jared Cannonier – UFC Fight Night 160 (UFC on ESPN+ 18). Watch the video and rate this fight!