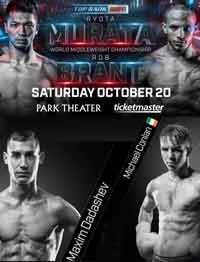 Review by AllTheBestFights.com: 2018-10-20, good performance by both boxers: Maxim Dadashev vs Antonio DeMarco gets three stars.

The undefeated Maxim Dadashev entered this fight with a perfect boxing record of 11-0-0 (10 KOs=91%) and he is ranked as the No.36 super lightweight in the world. In his last three bouts he has beat Clarence Booth, Abdiel Ramirez and Darleys Perez.
His opponent, the former Wbc Lw champion Antonio DeMarco, has an official record of 33-6-1 (24 knockouts) but he is not ranked as he hasn’t fought since October 14, 2017 when he defeated Eddie Ramirez; before this bout he had also beat Luis Solis in February but in 2015 he had lost to Rances Barthelemy (Rances Barthelemy vs Antonio DeMarco) and Omar Figueroa (Omar Figueroa vs Antonio DeMarco). Dadashev vs DeMarco is on the undercard of Ryota Murata vs Rob Brant. Watch the video and rate this fight!