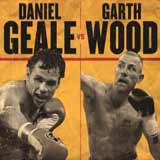 Review: 2014-02-19, pretty good fight with three knockdowns: Daniel Geale vs Garth Wood gets three stars. Daniel Geale entered this fight with a pro boxing record of 29-2-0 (15 knockouts) and he is ranked as the No.5 middleweight in the world, his only two losses came both via split decision: the first time when he faced Anthony Mundine in 2009 (=Mundine vs Geale, fight rated 4 stars) and the second time in his last bout against Darren Barker when he also lost the IBF middleweight title after four consecutive defenses (=Geale vs Barker).
His opponent, Garth Wood, has an official record of 12-3-1 (8 knockouts) and he entered as the No.36 in the same weight class, he was a professional Rugby League player until he made his professional boxing debut in 2007. He also faced Anthony Mundine twice winning the first time via ko in 2010 but then losing the rematch in 2011. Geale vs Wood is valid for the vacant IBF Pan Pacific and WBA Pan African middleweight titles. Watch the video and rate this fight!