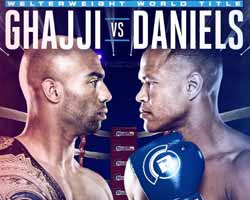 Review by AllTheBestFights.com: 2017-09-23, some good shots between Karim Ghajji and Raymond Daniels but it is not enough to get three stars: it gets two.

The current Bellator kickboxing and former Iska champion Karim Ghajji entered this fight with a professional kickboxing record of 98-13-1 (50 knockouts) and he is ranked as the No.9 super middleweight in the world. He fought four times between 2016 and 2017, beating Mustapha Haida (=Ghajji vs Haida 2), losing to Zoltan Laszak, defeating Luca Novello and taking revenge on Laszak.
His opponent, Raymond Daniels, has an official record of 11-3-0 (9 KOs=82%) and he entered as the No.10 in the same weight class. He lost to Nieky Holzken in 2015 (=Holzken vs Daniels 2) but then he has won over Francesco Moricca, Stefano Bruno (=Daniels vs Bruno), Zsolt Benedek (=Daniels vs Zsolt) and Csaba Gyorfi. Raymond Daniels vs Karim Ghajji is valid for the Bellator Kickboxing welterweight title (Ghajji’s first defense); undercard of Benson Henderson vs Patricky Freire (Bellator 183) – Bellator Kickboxing 7. Watch the video and rate this fight!