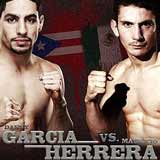 Review: 2014-03-15, disappointing fight between Danny Garcia and Mauricio Herrera: it gets two stars. The undefeated Danny Garcia entered this fight with a perfect record of 27-0-0 (16 knockouts) and he is ranked as the No.1 light welterweight in the world, last year he fought twice successfully defended his two belts: in the first fight he faced Zab Judah (=Garcia vs Judah) and then Lucas Matthysse (=Garcia vs Matthysse).
His opponent, Mauricio Herrera, has an official record of 20-3-0 (7 knockouts) and he entered as the No.21 in the same weight class, he suffered two out of his three defeats in 2012 but last year he fought and won twice. Garcia vs Herrera is valid for the WBA and WBC light welterweight titles, first world title shot for Herrera. Watch the video and rate this fight!