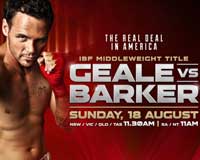 Review: 2013-08-17, great performance by both boxers and one knockdown: Daniel Geale vs Darren Barker gets three stars, very close fight. Daniel Geale (29-1-0, 15 KOs) entered as the No.3 middleweight in the world while Darren Barker (25-1-0, 16 KOs) entered as the No.9. Geale vs Barker is valid for the IBF middleweight title (Geale’s fifth defense). Watch the video!