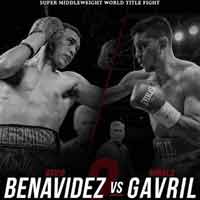 Review by AllTheBestFights.com: 2018-02-17, pretty good fight between David Benavidez and Ronald Gavril 2: it gets three stars.

The undefeated Wbc super-Mw champion David Benavidez entered this fight with a perfect boxing record of 19-0-0 (17 KOs=89%) and he is ranked as the No.16 super middleweight in the world. He fought three times last year winning over Sherali Mamajonov, Rogelio Medina (Benavidez vs Medina) and Ronald Gavril via split decision (their first bout, David Benavidez vs Ronald Gavril I).
His opponent, Ronald Gavril, has a record of 18-2-0 (14 KOs=78%) and he entered as the No.27 in the same weight class. Before losing to Benavidez, between 2016 and 2017, he had beat Juan Camilo Novoa, Christopher Brooker and Decarlo Perez. Benavidez vs Gavril 2 is valid for the WBC World super middleweight title (Benavidez’s first defense); undercard of Danny Garcia vs Brandon Rios. Watch the video and rate this fight!