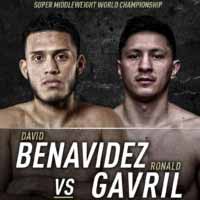 Review by AllTheBestFights.com: 2017-09-08, pretty good fight between David Benavidez and Ronald Gavril: it gets three stars.

The undefeated David Benavidez entered this fight with a perfect boxing record of 18-0-0 (17 KOs=94%) and he is ranked as the No.16 super middleweight in the world. He has already fought twice in 2017 winning over Sherali Mamajonov and Rogelio Medina (=Benavidez vs Medina).
His opponent, Ronald Gavril, has an official record of 18-1-0 (14 KOs=78%) and he entered as the No.20 in the same weight class. He suffered his only loss when he faced Elvin Ayala in 2015, since then he has won seven consecutive bouts beating Decario Perez in his last one. David Benavidez vs Ronald Gavril is valid for the vacant WBC World super middleweight title. Watch the video and rate this fight!

Their next fight: David Benavidez vs Ronald Gavril 2