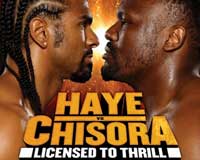 Review: 2012-07-14, good fight with a great fifth round: David Haye vs Dereck Chisora gets three stars. Dereck Chisora ranked as the No.14 heavyweight in the world, entered the fight with a record of 15-3-0 while David Haye had a record of 25-2-0 (Haye is not ranked as he hasn’t fought since July 2, 2011 when he was defeated by Wladimir Klitschko). Haye vs Chisora is valid for the vacant WBO and WBA International heavyweight titles. Watch the video!