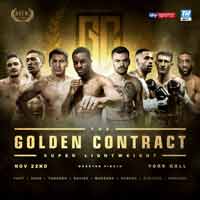 Review by AllTheBestFights.com: 2019-11-22, some good exchanges in the last part of the fight but is not enough to get three stars: Ohara Davies vs Logan Yoon gets two.

Ohara Davies entered this fight with a professional boxing record of 19-2-0 (14 knockouts) and he is ranked as the No.24 super lightweight in the world. He lost to Jack Catterall last year (Jack Catterall vs Ohara Davies) but he came back to win against Miguel Vazquez in 2019 (Ohara Davies vs Miguel Vazquez).
His opponent, the undefeated Logan Yoon, has a perfect record of 16-0-0 (12 KOs=75%) and he entered as the No.94 welterweight. In his last three fights he has won over John Renteria, Hamza Sempewo and Robert Frankel. Davies vs Yoon is the main event of the evening (quarter-finals of the super-lightweight ‘Golden Contract’ tournament). Watch the video and rate this fight!