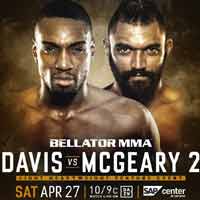 Review by AllTheBestFights.com: 2019-04-27, good fight between Phil Davis and Liam McGeary 2: it gets three stars.

The former Bellator light-Hw champion Phil Davis entered this fight with a mma record of 19-5-0 (47% finishing rate) and he is ranked as the No.3 light heavyweight in the world (currently the #1 in this division is Jon Jones). He fought twice last year beating Linton Vassell (Phil Davis vs Linton Vassell) and losing to Vadim Nemkov (Phil Davis vs Vadim Nemkov).
His opponent, the black belt in Bjj and former Bellator light-Hw champ Liam McGeary, has an official record of 13-3-0 (92% finishing rate) and he entered as the No.11 in the same weight class. He lost two consecutive fights between 2017 and 2018, against Linton Vassell (Liam McGeary vs Linton Vassell) and Vadim Nemkov (Liam McGeary vs Vadim Nemkov) but then he has beat Muhammed King Mo Lawal (Muhammed King Mo Lawal vs Liam McGeary). In their first bout Davis had defeated McGeary via unanimous decision (November 4, 2016 – Liam McGeary vs Phil Davis I); this second fight is on the undercard of Rory MacDonald vs Jon Fitch – Bellator 220. Watch the video and rate this fight!