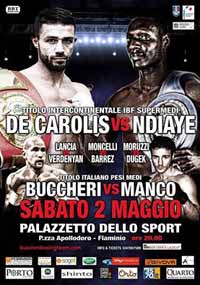 Review by AllTheBestFights.com: 2015-05-02, fight with too much holding and too many interruptions: Giovanni De Carolis vs Mouhamed Ali Ndiaye gets two stars.

Giovanni De Carolis entered this fight with a boxing record of 22-5-0 (11 knockouts) and he is ranked as the No.33 super middleweight in the world. He suffered his last defeat in 2013 when he faced Arthur Abraham (=Abraham vs De Carolis), since then he has fought and won twice, against Ivan Stupalo and Geard Ajetovic.
His opponent, Mouhamed Ali Ndiaye, has an official record of 24-2-1 (13 knockouts) and he entered as the No.51 in the same weight class. He fought just once last year losing the rematch with Christopher Rebrasse (=Ndiaye vs Rebrasse 2) but after this bout he came back to win in 2015 against Norbert Szekeres. De Carolis vs Ali Ndiaye is valid for the IBF Inter-Continental super middleweight title. Watch the video and rate this fight!