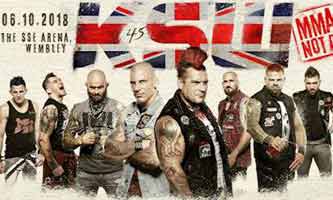 Review by AllTheBestFights.com: 2018-10-06, pretty good finish between Philip De Fries and Karol Bedorf but it is not enough to get three stars: it gets two.

The KSW Hw champion Philip De Fries entered this fight with a professional record of 15-6-0 (87% finishing rate) and he is ranked as the No.39 heavyweight in the world. He lost to Ivan Shtyrkov in 2017 but then he has won over Anton Vyazigin, James Thompson and Michal Andryszak.
His opponent, Karol Bedorf, has a mma record of 15-3-0 (60% finishing rate) and he entered as the No.62 in the same weight class. He was defeated by Fernando Rodrigues Jr in 2016 (Karol Bedorf vs Fernando Rodrigues Jr) but he came back to win in 2018 against Mariusz Pudzianowski (Mariusz Pudzianowski vs Karol Bedorf). De Fries vs Bedorf, main event of KSW 45, is valid for the KSW heavyweight title (De Fries’ first defense). Watch the video and rate this fight!

Event: KSW 45: The Return to Wembley

(Free embeddable video hosted on Youtube and not uploaded by AllTheBestFights)
https://www.youtube.com/watch?v=PxQDztsFVrM