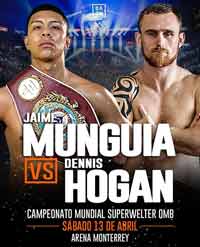 Review by AllTheBestFights.com: 2019-04-13, we hope to see a rematch soon: Diego De La Hoya vs Enrique Bernache gets two stars.

The undefeated cousin of Oscar De La Hoya Diego De La Hoya entered this fight with a perfect boxing record of 21-0-0 (10 knockouts) and he is ranked as the No.10 super bantamweight in the world (currently the #1 in this division is Rey Vargas). In his last three bouts he has won over Alan Isaias Luques Castillo, Randy Caballero (Diego De La Hoya vs Randy Caballero) and Jose Salgado (Diego De La Hoya vs Jose Salgado).
His opponent, Enrique Bernache, has an official record of 24-12-0 (12 knockouts) and he entered as the No.73 featherweight but he won just one out of his last four fights, against Emmanuel Dominguez in 2017; after this bout, in 2018, he lost to Can Xu and Emilio Sanchez. De La Hoya vs Bernache is on the undercard of Jaime Munguia vs Dennis Hogan. Watch the video and rate this fight!