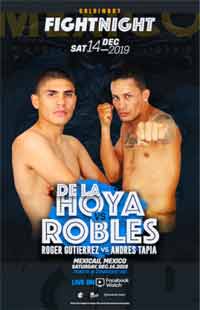 The cousin of Oscar De La Hoya, Diego De La Hoya, entered this fight with a boxing record of 21-1-0 (10 knockouts) and he is ranked as the No.28 super bantamweight in the world but he comes off his first loss, suffered against Ronny Rios in July (Diego De La Hoya vs Ronny Rios); before this bout he had faced Enrique Bernache but the bout ended in a no-contest (Diego De La Hoya vs Enrique Bernache) and he had beat Jose Salgado in 2018 (Diego De La Hoya vs Jose Salgado).
His opponent, Renson Robles, has an official record of 16-6-0 (9 knockouts) and he entered as the No.209 in the same weight class. He was defeated by Luis Nery last year (Luis Nery vs Renson Robles) but then he has won over Darwin Morillo, Valdemar Froilan and Samuel Araque. De La Hoya vs Robles is the main event of the evening. Watch the video and rate this fight!