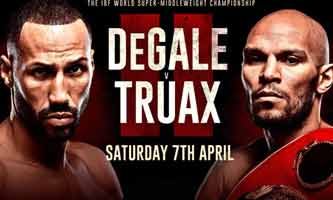 Review by AllTheBestFights.com: 2018-04-07, disappointing fight between Caleb Truax and James DeGale 2: it gets two stars.

The Ibf super-Mw champion Caleb Truax entered this fight with a professional boxing record of 29-3-2 (18 knockouts) and he is ranked as the No.8 super middleweight in the world (currently the #1 in this division is George Groves). He lost to Anthony Dirrell in 2016 (Dirrell vs Truax) but then he has won over Zachariah Kelley, KeAndrae Leatherwood and James DeGale in their previous and last fight (James DeGale vs Caleb Truax I).
His opponent, the 2008 Olympic Mw gold medalist and former Ibf world champion James DeGale, has an official record of 23-2-1 (14 knockouts) and he entered as the No.12 in the same weight class but his last victory was in 2016 when he had beat Rogelio Medina (DeGale vs Medina). After this fight he fought twice in 2017, drawing with Badou Jack (DeGale vs Jack) and losing to Truax. Truax vs DeGale 2 is valid for the IBF World super middleweight title (Truax’s first defense); undercard of Erislandy Lara vs Jarrett Hurd. Watch the video and rate this fight!

Their previous fight: James DeGale vs Caleb Truax I