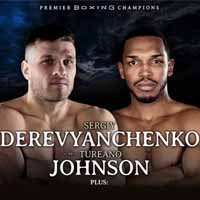 Review by AllTheBestFights.com: 2017-08-25, great fight between Sergiy Derevyanchenko and Tureano Johnson: it gets three stars.

The undefeated Sergiy Derevyanchenko entered this fight with a perfect boxing record of 10-0-0 (8 KOs=80% finishing rate) and he is ranked as the No.7 middleweight in the world (currently the #1 in this division is Saul ‘Canelo’ Alvarez). He beat Mike Guy and Sam Soliman in 2016 (=Derevyanchenko vs Soliman) but he has also fought once in 2017 winning over Kemahl Russell (=Derevyanchenko vs Russell).
His opponent, Tureano Johnson, has an official record of 20-1-0 (14 knockouts) and he entered as the No.25 in the same weight class. He suffered his only loss when he faced Curtis Stevens in 2014 (=Stevens vs Johnson), since then he has won six consecutive bouts beating Fabiano Pena in 2017. Sergiy Derevyanchenko vs Tureano Johnson is the main event of the evening. Watch the video and rate this fight!