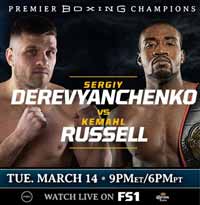 Review by AllTheBestFights.com: 2017-03-14, pretty good fight between Sergiy Derevyanchenko and Kemahl Russell: it gets three stars.

Both undefeated, the Russian Sergiy Derevyanchenko entered this fight with a perfect boxing record of 9-0-0 (7 KOs=78%) and he is ranked as the No.6 middleweight in the world (currently the #1 in this division is Gennady Golovkin) while his opponent, Kemahl Russell, has an official record of 10-0-0 (8 KOs=80%) and he entered as the No.96 in the same weight class. Both boxers fought twice last year: Derevyanchenko beat Mike Guy and Sam Soliman (=Derevyanchenko vs Soliman) while Russell won over Denny Dalton and Henry Mercer. Sergiy Derevyanchenko vs Kemahl Russell is the main event of the evening. Watch the video and rate this fight!

Report broken video
« Best fights of the week 10, year 2017
Best of BOXING: Ranking of the best boxing Fights of the Year 2017 by ATBF »
HELP US!!! Since the CORONAVIRUS pandemic started, AllTheBestFights.com has struggled to survive! If you have enjoyed this website for the past 10 years, today we ask you for a little help: