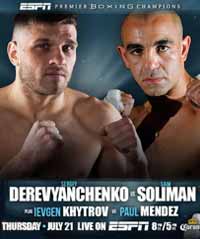 Review by AllTheBestFights.com: 2016-07-21, pretty good finish between Sergiy Derevyanchenko and Sam Soliman but it is not enough to get three stars: it gets two.

The undefeated Sergiy Derevyanchenko entered this fight with a perfect record of 8-0-0 (6 KOs=75%) and he is ranked as the No.45 middleweight in the world. He has already fought once in 2016 defeating Mike Guy.
His opponent, the former Ibf Mw champion Sam Soliman, has a boxing record of 44-13-0 (18 knockouts) but he is not ranked as he hasn’t fought since June 26, 2015 when he was defeated by Dominic Wade (=Soliman vs Wade); before this fight he had also lost to Jermain Taylor (=Soliman vs Taylor). Derevyanchenko vs Soliman is the main event of the evening. Watch the video and rate this fight!