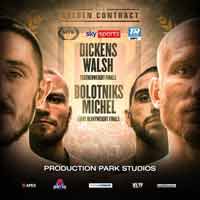 Review by AllTheBestFights.com: 2020-12-02, fight not so exciting between James Dickens and Ryan Walsh: it gets two stars (take a look at our ranking of the best boxing fights of 2020).
James Dickens entered this fight with a professional boxing record of 29-3-0 (11 knockouts) and he is ranked as the No.14 featherweight in the world. ‘Jazza’ lost two consecutive bouts between 2016 and 2017, against Guillermo Rigondeaux (Guillermo Rigondeaux vs James Dickens) and Thomas Patrick Ward, but then he has won seven fights defeating Leigh Wood in his last one (Leigh Wood vs James Dickens).
His opponent, Ryan Walsh, has an official record of 26-2-2 (12 knockouts) and he entered as the No.11 in the same weight class. He lost to Dennis Ceylan in 2016 (via split decision) but since then he has collected one draw and five victories beating Tyrone McCullagh in 2020. Walsh vs Dickens is valid for the WBO European featherweight title (final of the Golden Contract featherweight tournament). Watch the video and rate this fight!