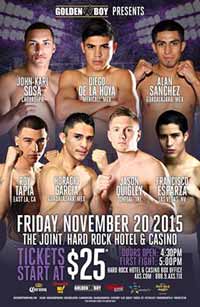 The undefeated Diego De La Hoya (cousin of Oscar De la Hoya) entered this fight with a perfect boxing record of 12-0-0 (7 knockouts) and he is ranked as the No.25 super bantamweight in the world. He has already fought four times in 2015 beating Jesus Ruiz in his last bout (=Ruiz vs De La Hoya).
His opponent, Giovanni Delgado, has an official record of 15-3-0 (9 knockouts) but he comes off the loss against Joseph Diaz. De La Hoya vs Delgado is the main event of the evening. Watch the video and rate this fight!