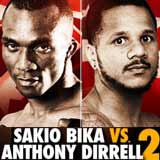 Review: 2014-08-16, disappointing and pretty boring fight with too much clinching: the second bout between Sakio Bika and Anthony Dirrell gets one star! Sakio Bika entered this fight with a pro boxing record of 32-5-3 (21 knockouts) and he is ranked as the No.10 super middleweight in the world, he suffered two defeats in 2010, against Jean-Paul Mendy and #1 Andre Ward, but after this fight he collected four consecutive victories and one draw (his first bout against Dirrell, Bika vs Dirrell).
His opponent, the undefeated Anthony Dirrell, has an official record of 26-0-1 (22 KOs=84%) and he entered as the No.12 in the same weight class. Bika vs Dirrell 2 is valid for the WBC super middleweight title (Bika’s second defense); undercard of Shawn Porter vs Kell Brook. Watch the video and rate this fight!