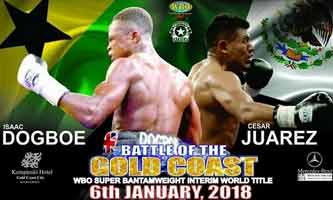 Review by AllTheBestFights.com: 2018-01-06, nice and tough exchanges from the first bell: Isaac Dogboe vs Cesar Juarez is close to get four stars!

The undefeated Isaac Dogboe entered this fight with a perfect boxing record of 17-0-0 (11 knockouts) and he is ranked as the No.13 super bantamweight in the world. In his last three fights he has won over Neil John Tabanao, Julian Evaristo Aristule and Javier Nicolas Chacon.
His opponent, Cesar Juarez, has an official record of 20-5-0 (15 KOs=75%) and he entered as the No.10 in the same weight class. He suffered two consecutive losses between 2015 and 2016, against Nonito Donaire (4-stars fight Donaire vs Juarez) and Giovanni Delgado, but then he has won three bouts beating Eugene Lagos in 2017. Dogboe vs Juarez is valid for the interim WBO World super bantamweight title. Watch the video and rate this fight!

(Free embeddable video hosted on Youtube and not uploaded by AllTheBestFights)
https://www.youtube.com/watch?v=9YPs77YJVTM