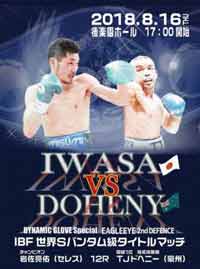 Review by AllTheBestFights.com: 2018-08-16, fight not particularly good between Ryosuke Iwasa and TJ Doheny: it gets two stars.

The Ibf super-Bw champion Ryosuke Iwasa entered this fight with a professional boxing record of 25-2-0 (16 knockouts) and he is ranked as the No.6 super bantamweight in the world (currently the #1 in this division is Luis Nery). He lost to Lee Haskins in 2015 (Iwasa vs Haskins) but then he has won six bouts defeating Glenn Medura, Yukinori Oguni (Yukinori Oguni vs Ryosuke Iwasa) and Ernesto Saulong in his last three (Ryosuke Iwasa vs Ernesto Saulong).
His opponent, the undefeated TJ Doheny, has a perfect record of 19-0-0 (14 knockouts) and he entered as the No.26 in the same weight class. In his last three fights he has won over Espinos Sabu, Pipat Chaiporn and Mike Oliver. Iwasa vs Doheny is valid for the IBF World super bantamweight title (Iwasa’s second defense). Watch the video and rate this fight!

(Free embeddable video hosted on Youtube and not uploaded by AllTheBestFights)
https://www.youtube.com/watch?v=bIdIZLA5s0Y