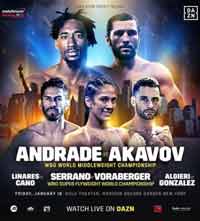 Review by AllTheBestFights.com: 2019-01-18, some good exchanges between TJ Doheny and Ryohei Takahashi but it is not enough to get three stars: it gets two.

The undefeated Ibf super-Bw champion TJ Doheny entered this fight with a perfect record of 20-0-0 (14 knockouts) and he is ranked as the No.9 super bantamweight in the world (currently the #1 in this division is Daniel Roman). In his last three fights he has won over Pipat Chaiporn, Mike Oliver and Ryosuke Iwasa (Ryosuke Iwasa vs TJ Doheny).
His opponent, Ryohei Takahashi, has a boxing record of 16-3-1 (6 knockouts) and he entered as the No.40 in the same weight class. He was defeated by Yuki Iriguchi in 2017 but then he has won five bouts beating Shingo Kusano in his last one. Doheny vs Takahashi is valid for the IBF World super bantamweight title (Doheny’s first defense); undercard of Demetrius Andrade vs Artur Akavov. Watch the video and rate this fight!

(Free embeddable video hosted on Dailymotion and not uploaded by AllTheBestFights)
https://www.dailymotion.com/video/x70xtp5