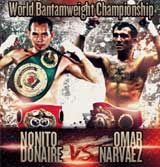 Review: 2011-10-22, very technical fight between Nonito Donaire and Omar Andres Narvaez but it was not as spectacular as we expected: two stars. Donaire defeated Narvaez by unanimous decision retaining his WBC and WBO bantamweight titles. Nonito Donaire (26-1-0) entered as the No.1 bantamweight in the world while Omar Narvaez (35-0-2) entered as the No.1 super flyweight. Watch the video!

Alternative video, the fight Donaire vs Narvaez starts in the 64th minute