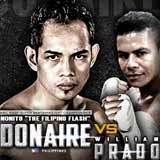 Review by AllTheBestFights.com: 2015-03-28, one sided fight between Nonito Donaire and William Prado: we can’t give more than two stars.

The former world champion in five different weight classes Nonito Donaire entered this fight with a pro boxing record of 33-3-0 (21 knockouts) and he is ranked as the No.5 featherweight in the world; he fought twice in 2014 winning the Wba Fw title against Simpiwe Vetyeka (=Donaire vsVetyeka) but then he lost the belt to #1 Nicholas Walters (=Donaire vs Walters).
His opponent, William Prado, has a record of 22-4-1 (15 knockouts), he suffered his last defeat in 2013 when he faced Scott Quigg; after this bout he came back to win against Marcelo Bispo (who was at his first professional boxing fight). ‘The Filipino Flash’ Donaire vs Prado is valid for the vacant NABF super bantamweight title; undercard of Donnie Nietes vs Gilberto Parra – Pinoy Pride 30. Watch the video and rate this fight!