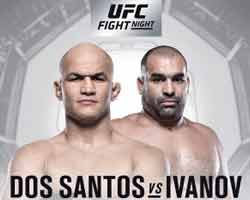 Review by AllTheBestFights.com: 2018-07-14, disappointing fight between Junior dos Santos and Blagoy Ivanov: it gets two stars.

The black belt in Brazilian jiu-jitsu and former Ufc Hw champion Junior dos Santos entered this fight with a record of 18-5-0 (78% finishing rate) and he is ranked as the No.10 heavyweight in the world (currently the #1 in this division is Daniel Cormier) but ‘Cigano’ lost two out of his last three fights, against Alistair Overeem in 2015 (dos Santos vs Overeem) and Stipe Miocic in 2017 (Stipe Miocic vs Junior dos Santos 2); between these two bouts JDS beat Ben Rothwell (dos Santos vs Rothwell).
His opponent, the black belt in judo, former world combat sambo and Wsof champion Blagoy Ivanov, has a mma record of 16-1-0 (75% finishing rate) and he entered as the No.21 in the same weight class. ‘Baga’ Ivanov suffered his only loss when he faced Alexander Volkov in 2014 (final of the Bellator Hw tournament – season ten – Volkov vs Ivanov), after this bout he has won five consecutive fights beating Shawn Jordan (Ivanov vs Jordan) and Caio Alencar in 2017 (Blagoy Ivanov vs Caio Alencar). Dos Santos vs Ivanov is the main event of UFC Fight Night 133. Watch the video and rate this fight!

(Free embeddable video hosted on Youtube and not uploaded by AllTheBestFights)
https://www.youtube.com/watch?v=otutZsmZq5Y