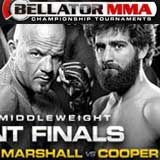 Review: 2013-04-04, aggressive start and spectacular finish: Brett Cooper vs Doug Marshall gets three stars. Brett Cooper (19-7-0, 74% finishing rate) entered as the No.28 middleweight in the world while Doug Marshall (17-6-0, 89% finishing rate) entered as the No.57. Cooper vs Marshall is the final of the Bellator middleweight tournament; undercard of Pat Curran vs Shahbulat Shamhalaev – Bellator 95. Watch the video!