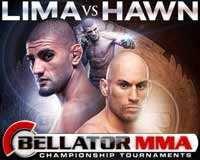 Review: 2014-04-18, pretty boring and disappointing fight between Douglas Lima and Rick Hawn: it gets one star! Douglas Lima entered this fight with a professional mma record of 25-5-0 (88% finishing rate) and he is ranked as the No.16 welterweight in the world, he fought and won three times in 2013 winning the Bellator Ww tournament final against Ben Saunders (=Saunders vs Lima 2); he had already won the Bellator tournament in 2011 but then he lost the title-shot against Ben Askren (=Askren vs Lima).
His opponent, Rick Hawn, has an official record of 18-2-0 (61% ko/tko victory rate – he has never won via submission) and he entered as the No.19 in the same weight class, he is a black belt in judo and bjj and he is 37 years old, eleven years older than Lima. Hawn fought five times in 2013 losing only his first bout against Michael Chandler, in a fight valid for the Bellator lightweight title (=Chandler vs Hawn); after that bout he came back to the welterweight division winning the season 9 of the Ww tournament. Lima vs Hawn, main event of Bellator 117, is valid for the vacant Bellator welterweight title. Watch the video and rate this fight!