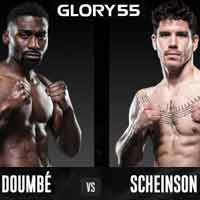 Review by AllTheBestFights.com: 2018-07-20, good exchanges between Cedric Doumbe and Alan Scheinson: it gets three stars.

The former Glory Ww and WAKO Pro Mw champion Cedric Doumbe entered this fight with a kickboxing record of 69-7-1 (40 knockouts) and he is ranked as the No.4 super middleweight in the world. He has already fought twice in 2018 losing to Alim Nabiev (Cedric Doumbe vs Alim Nabiev) and beating Thongchai Sitsongpeenong (Cedric Doumbe vs Thongchai Sitsongpeenong).
His opponent, Alan Scheinson, has an official record of 51-6-0 (37 knockouts) and he entered as the No.12 in the same weight class. He has also fought twice this year losing to Thongchai and defeating Anghel Cardos. Doumbe vs Scheinson is on the undercard of Alex Pereira vs Yousri Belgaroui 3 – Glory 55. Watch the video and rate this fight!

(Free embeddable video hosted on Youtube and not uploaded by AllTheBestFights)
https://www.youtube.com/watch?v=xluRBWWT078