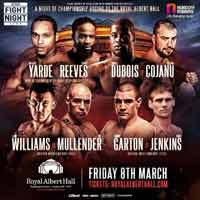 Review by AllTheBestFights.com: 2019-03-08, pretty good finish between Daniel Dubois and Razvan Cojanu but it is not enough to get three stars: it gets two.

The undefeated Daniel Dubois entered this fight with a perfect record of 9-0-0 (8 KOs=89%) and he is ranked as the No.50 heavyweight in the world. He fought three times last year winning over DL Jones, Tom Little and Kevin Johnson.
His opponent, Razvan Cojanu, has a boxing record of 16-5-0 (9 knockouts) and he entered as the No.292 in the same weight class but he comes off three consecutive losses, against Joseph Parker (Joseph Parker vs Razvan Cojanu), Luis Ortiz (Luis Ortiz vs Razvan Cojanu) and Nathan Gorman. Dubois vs Cojanu is on the undercard of Anthony Yarde vs Travis Reeves. Watch the video and rate this fight!