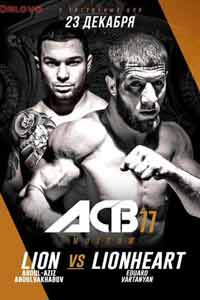 Review by AllTheBestFights.com: 2017-12-23, good fight between Albert Duraev and Vyacheslav Vasilevsky: it gets three stars.

The black belt in judo, world combat sambo, M-1 light-Hw and Mw champion Vyacheslav Vasilevsky entered this fight with a pro mma record of 31-5-0 (71% finishing rate) and he is ranked as the No.45 middleweight in the world. He suffered two consecutive defeats in 2016, both with Alexander Shlemenko (=Shlemenko vs Vasilevsky I and Shlemenko vs Vasilevsky II), but then he has won four bouts beating Luis Sergio Melo Jr in his last one.
His opponent, Albert Duraev, has a record of 10-3-0 (90% finishing rate) and he entered as the No.47 in the same weight class. He suffered his last loss when he faced Anatoly Tokov in 2014, since then he has won six bouts defeating Clifford Starks in 2017. Duraev vs Vasilevsky is valid for the vacant ACB middleweight title: undercard of Abdul Aziz Abdulvakhabov vs Eduard Vartanyan 2 – ACB 77. Watch the video and rate this fight!