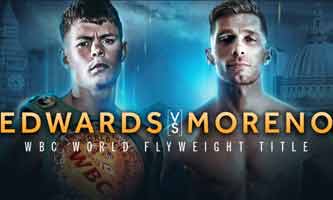 Review by AllTheBestFights.com: 2019-03-23, good fight between Charlie Edwards and Angel Moreno: it gets three stars.

The Wbc Flw champion Charlie Edwards entered this fight with a pro record of 14-1-0 (6 knockouts) and he is ranked as the No.2 flyweight in the world (currently the #1 in this division is Kosei Tanaka). He suffered his only loss when he faced John Riel Casimero in 2016 (John Riel Casimero vs Charlie Edwards), since then he has won six bouts defeating Ricky Little, Anthony Nelson and Cristofer Rosales in 2018 (Cristofer Rosales vs Charlie Edwards).
His opponent, Angel Moreno, has an official boxing record of 19-2-2 (6 knockouts) and he entered as the No.41 in the same weight class. He lost to Thomas Masson in 2016 but then he has collected nine consecutive victories beating Cristian Narvaez in his last one. Edwards vs Moreno is valid for the WBC World flyweight title (Edwards’ first defense). Watch the video and rate this fight!