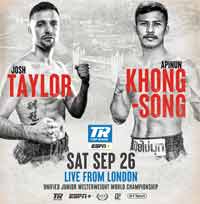 Review by AllTheBestFights.com: 2020-09-26, pretty boring fight between Charlie Edwards and Kyle Williams: it gets two stars.
The former Wbc Flw champion Charlie Edwards entered this fight with a professional record of 15-1-0 (6 knockouts) and he is ranked as the No.17 bantamweight in the world. He suffered his only loss when he faced John Riel Casimero in 2016 (John Riel Casimero vs Charlie Edwards), since then he has collected seven victories, the last one with Angel Moreno in March 2019 (Charlie Edwards vs Angel Moreno), and one no-contest against Julio Cesar Martinez Aguilar (controversial NC since the bout was originally announced as a KO victory for the Mexican, Charlie Edwards vs Julio Cesar Martinez).
His opponent, Kyle Williams, has an official boxing record of 11-2-0 (3 knockouts) and he entered as the No.96 in the same weight class but he lost two out of his last three fights, against Ukashir Farooq and Ionut Baluta; between these two bouts he beat Jose Aguilar. Williams vs Edwards is on the undercard of Josh Taylor vs Apinun Khongsong. Watch the video and rate this fight!