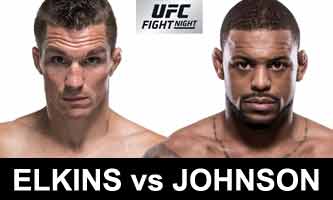 Review by AllTheBestFights.com: 2018-01-14, good fight between Darren Elkins and Michael Johnson: it gets three stars (UFC Performance of the Night).

Darren Elkins entered this fight with a pro record of 23-5-0 (48% finishing rate) and he is ranked as the No.9 featherweight in the world (currently the #1 in this division is Max Holloway). He lost to Hacran Dias in 2014 but then he has won over Robert Whiteford, Chas Skelly, Godofredo Pepey, Mirsad Bektic (=Elkins vs Bektic) and Dennis Bermudez (=Elkins vs Bermudez).
His opponent, Michael Johnson, has an official mma record of 17-12-0 (59% finishing rate) and he entered as the No.21 lightweight but he won just one out of his last five bouts, against Dustin Poirier in 2016 (=Poirier vs Johnson). After this bout he was defeated by Khabib Nurmagomedov (=Johnson vs Nurmagomedov) and Justin Gaethje (Mma Fight of the Year 2017, Johnson vs Gaethje). Elkins vs Johnson is on the undercard of Jeremy Stephens vs Doo Ho Choi – UFC Fight Night 124. Watch the video and rate this fight!

(Free embeddable video hosted on Youtube and not uploaded by AllTheBestFights)
https://www.youtube.com/watch?v=BTvIqEVemlw