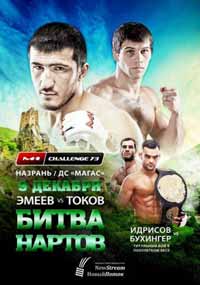 Review by AllTheBestFights.com: 2016-12-09, close fight but not so exciting: Ramazan Emeev vs Anatoly Tokov gets two stars.

The M-1 champion Ramazan Emeev entered this fight with a professional mma record of 14-3-0 (71% finishing rate) and he is ranked as the No.19 middleweight in the world. He lost to Vyacheslav Vasilevsky in 2014 (=Vasilevsky vs Emeev) but then he has won three bouts taking revenge on Vasilevsky in 2015 (=Vasilevsky vs Emeev 2) and beating Maiquel Falcao in his last one (=Emeev vs Falcao).
His opponent, Anatoly Tokov, has an official record of 24-1-0 (79% finishing rate) and he entered as the No.36 in the same weight class. He suffered his only loss when he faced Magomed Magomedkerimov in 2011, since then he has collected 17 consecutive victories defeating Arbi Agujev and Vladimir Filipovic in 2016. Emeev vs Tokov, main event of M-1 Challenge 73, is valid for the M-1 Global middleweight title. Watch the video and rate this fight!